Fish and chips in a seaside poke— and other ways to celebrate a royal birthday.

Here in Armenia though, I, about 100 others, and a British military brass band, gathered at the Congress hotel in Yerevan. Our host Ambassador Judith Farnworth spoke great Armenian as she welcomed her guests, and toasted the birthday Monarch. The Deputy Prime Minister of Armenia wished the Queen a happy 93rd birthday, and we all ate fish and chips with Sarson’s vinegar, sausage rolls, and scotched quail’s eggs. On the table by the mini Yorkshire puddings with roast beef, there was a giant bottle of Colman’s mustard. Friends, there was Stilton and Wensleydale. There were oatcakes and water biscuits. There was quiche.

Most Armenians don’t expect to have cucumber floating in their drink, and so I had a punch bowl of Pimms to myself. Dark, warm flat beer was served by imperial measure, and there was a gin bar. I had the sense to avoid these options after the Pimms. 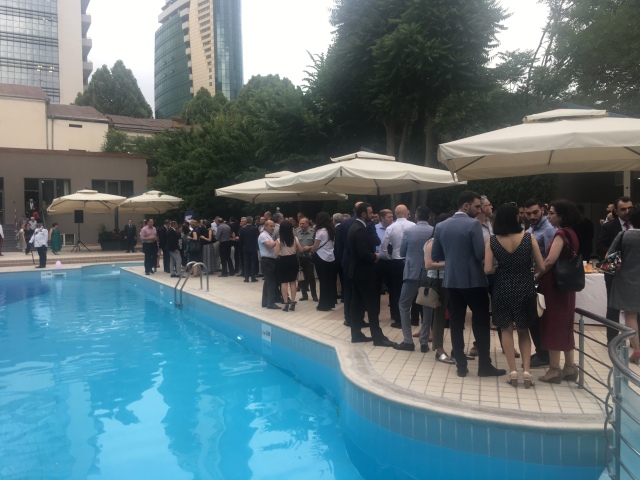 In addition to pictures of the Queen, the royal great-grandchildren, and Harry and Meghan kissing, there were a great many pictures advertising Britain as Great. These were illustrated with pictures of English castles and London icons. Being from Northern Ireland, part of the United Kingdom of Great Britain and Northern Ireland, I could have chosen to be piqued by NI’s exclusion. Instead I sweetened my temper by eating Eton mess. I thought about working myself into a foment just so I could follow this with some strawberries and cream and a slice of lemon drizzle cake. Then the band played Danny Boy and I decided to mellow.

I don’t know when I enjoyed a birthday party more. All things considered, I have probably had a better week than the Queen herself. Happy birthday Ma’am. Now get some rest.

1 Response to Fish and chips in a seaside poke— and other ways to celebrate a royal birthday.