Amnesia and Arafat: The World According to Barkis 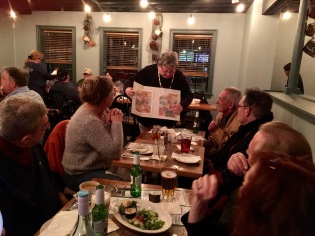 Margie, a docent and all-round decent person, led the learning at my going-away dinner. Her project board featured maps of Armenia. A pop-quiz quickly confirmed that no one knew where it was. Kevin was closest and Michael (who couldn’t join the party until after his nightly viewing of Jeopardy) was also in the ballpark. As Barkis said later “You probably know where you’re going, but the rest of us have no idea.” In fact, I am only inches ahead of him. 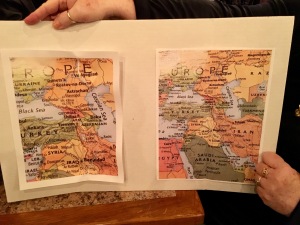 With one week to go, I am trying to get real but am still much clearer about what I am leaving behind, than where I am going to. With my house rented, I have been staying with friends and neighbors. What will it be like moving in with people I don’t know? Will I ever again enjoy a shower as warm and powerful as Karen’s? How will my new bed and pillows compare to the bliss of Peggoty’s spare room? I have started to count last times: the last time I will have a dress hemmed at the dry cleaners. The last time I can afford a blow-

dry. The last order of crab dip and rockfish (there are only freshwater fish in Armenia.) The last time behind a steering wheel. (Peace Corps does not permit volunteers to drive.) The last time I will sing Jingle Bells with my granddaughter…

Niya and I were in Target the other day and cut through the diaper aisle with our cart. “I don’t wear diapers” Niya announced loudly “I’m a big girl. I wear pull-ups.” Other shoppers nodded approvingly. She adjusted her volume to reach a wider audience “Grandma wears diapers.” People smiled uneasily. I do NOT wear diapers. At least not yet. Based on advice from current Peace Corps volunteers, this may be a mistake because, for Americans in Armenia, it seems unfortunate intestinal incidents are pretty much guaranteed. I stocked up on Wet Wipes and will let you know if a pass on padded panties turns out to be an error of judgement. Something for you to look forward to.

Which brings us to Doo Doo shots, an Armenian drink I learned about today, featuring vodka and all the other ingredients of a Bloody Mary, without the space-wasting tomato juice. This, with Mulberry vodka and apricot brandy, are also mentioned in warning dispatches. Best be wary. The Armenians also make wine and have evidence that wine has been made in their mountains for at least 6000 years. Today’s grapes are from a strain of vines believed to have been planted by Noah shortly after he disembarked the Ark. A mention of Noah, brings me back to Barkis, still musing on my upcoming adventure: “You are off to Amnesia” he said “and you’ll see Mount Arafat …”. Margie clearly has more work to do. 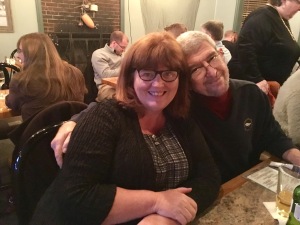