Swirling for the dyspraxic

My approach to drinking wine is very much like my approach to playing chess. I  am terribly keen, but not very well-informed. This can cause me to make poor decisions, both at the bar, and on the board.

While my chess has shown very little improvement despite a series of lessons, and constant practice, I decided that I should tackle my ignorance on the topic of red, white and rose. I signed up for Artem Parseghyan’s two-evening course at the Yerevan Wine Academy. 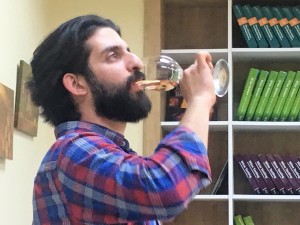 Artem is everything you want in a wine-maker from a country that has been busy with amphoras, juice and presses since Noah was a boy. He has ink-black hair that follows him at an angle of 45 degrees, and a nose that can get deep into the glass. Another great thing about Artem is that he is not at all pompous about wine. He knew we were there for the tasting, and encouraged hearty consumption, although he himself used a little silver bucket and spat instead of swallowing.

We learned how to sniff appreciatively and how to swirl. Artem says sweerl and it is adorable. I was bad at sweerling–lots of messy splashing–and so Artem introduced me to swirling for the dyspraxic. I am to keep the base of my stemware on the table and turn it in furious circles.

We learned why some screw-top wine can smell bad when it is first opened (cabbages, farmyard, rotten eggs) and how to dispel this either by decanting the bottle to let some air in, or to swirl the glass furiously until it dissipates. “Unless” said Artem “you are having a party. In that case nobody will notice, or mind”

We used tiny adorable bottles of scent to test our powers of identification. I got 6 out of 10, largely because I alone in the class knew the smell of hawthorn. I don’t think it is an Armenian thing…

We discussed color and complexity and finish and I learned that there is a chart of names and shades that wine-makers use when they talk amongst themselves. Artem’s own Trinity Canyon Vineyard 6100 rose I consider to be onion skin. He describes it as salmon. I am pleased to tell you it tastes of strawberries and cream and its finish lingers deliciously long.

We learned to read labels from the old world, and the new and had a fabulously interesting discussion about why Armenian wines are now described as “historic”. In 2007 a 6,100 year old winery was discovered in Areni in the Vayots Dzor region of Armenia where most Armenian wine is still made today. It is fair to say therefore that Armenia was one of the very first nations on earth to make wine. Georgia and Turkey also get shout-outs for this. But in the time of Soviet centralized economic planning, Georgia was designated as the wine producing region, and Armenia was told to make brandy. This meant that Armenian wine production dwindled to almost nothing, and many of the ancient grape varieties are today nearly extinct. Luckily progress in grafting (or something) means that some of these are now being reclaimed. I had started drinking by then, so some of the details escaped me. So Armenian wine is neither new world, nor old. It is historic and it is your duty to drink it so it isn’t lost and gone forever. Get started.

We finished the evening with a Sauternes and picked out its place of origin on a map of France. There was much talk of honey and apricots and sunshine. We talked ignoble rot, if you like. All week I have been remembering to hold my glass by its stem and to sniff, sweerl and tip my glass. Artem told us how to pour wine as well as how to drink it, and finished with tips on how to clink. Make clink buddies he said. You can never have too many. That’s my kind of evening class. 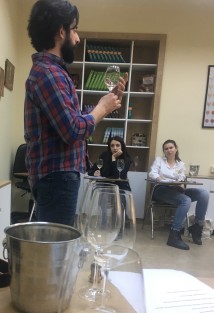 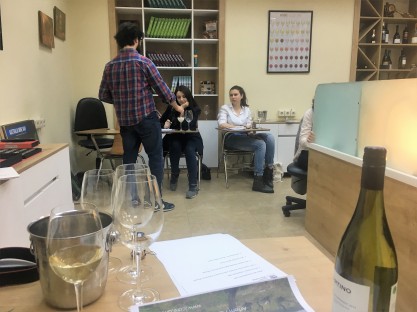 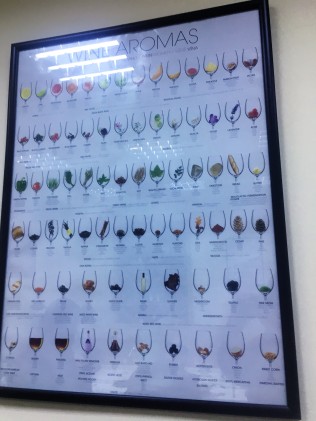