Ara came the whole way to Yerevan to pick me up and drive me smoothly back to Goris. I was so glad to see him, I nearly wept. He opened the passenger door and once he got in his own seat, helped me with my seatbelt. I couldn’t manage it with my broken right wrist in a sling. His concern as he maneuvered around the potholes on the five-hour drive south was very touching. When we arrived in the city, he stopped off at his mother-in-law’s in order to pick up some fresh cooked beans and other bits and pieces, so I wouldn’t have to try to cook.

He needn’t have worried on that score. When I arrived back at my spotlessly clean apartment, there was a bunch of fresh-picked daffodils on the table and Aleta and Haykush were waiting to welcome home the invalid.

“Come upstairs” said Aleta, taking me firmly by my one good arm “Haykush will make you zhingalov hats”

They know the homemade flatbread stuffed with fresh herbs is one of my favorite snacks. Later I got into my own bed made up with clean sheets and felt very glad to be home.

My sister had offered to fly from England to help me manage. “I’ll be fine” I’d said, without really realizing how difficult life without my dominant hand would be.

I slept in my clothes, as I had done for the previous couple of days. The next morning I managed to wriggle off my leggings and underwear and to find replacements. It turns out though,that my girth is such that my left hand will not reach to my right hip. Try as I might, I couldn’t pull up my nether garments to what passes for my waist. Aleta to the rescue when she brought me the first of many cups of coffee, always served with a piece of chocolate or two.

Peace Corps volunteers rallied too. Ashlin and Bianca brought wine and wielded the corkscrew. They made huge batches of soup and salads I could eat for days. They provided cheering company.

Work was piling up. This is our busiest time of year, preparing for the finals of the National Poetry Recitation Contest. Kristine and Davit, who are overworked at the best of times, very graciously said they would manage my workload. They both sounded unfailingly upbeat and adult about it, but I knew it had to be a pain. Besides, I am not very good at letting things go. I found myself getting twitchy and anxious. If my mental health was not to go the way of my physical prowess, I would have to get back to work. I discovered the little microphone symbol beside the space bar on my phone keyboard and began to use voice dictation. It is how I am writing this post. I love artificial intelligence. I just wish it was more intelligent. It’s good – but it can’t understand either Northern Irish vowel sounds, or Armenian names. Let’s just say it works better for other people than it ever will for me. Slowly, I made corrections with the thumb of my left hand. Often I had to delete cursewords yelled in frustration and faithfully reproduced. After fewer than a dozen emails composed in about half a day I was exhausted. I thought apologetically of my friend Richard who suffered a stroke in his 20s and lost the use of his right hand. I realized I had never been quite sympathetic enough about the trials and frustrations he faced. Sorry Richard. I get it now.

I had a school to visit. A bra seemed a necessity for the first time in just under three weeks. Perhaps I should also attempt a shower? Aleta was on hand with a towel and did Yeoman’s work manhandling my damp mammaries into sturdy foundation wear. Our Armenian hosts baby their American volunteers all the time, but washing, drying and dressing us is surely outside the scope of work. Aleta bore it bravely.

Worse was to follow. If there is anything more incapacitated than an unfit adult with a broken arm, then it is an unfit adult with a broken arm and a serious gastrointestinal complaint. Among the things Aleta has been forced to clean in the past few days include clothes, bedding, the bathroom and me. I have decided that the only thing to do is consider this humiliation as practice for being old. I also doubt if I will ever be troubled with shame again. Thank God for Aleta and her no-nonsense good cheer.

Fully dressed and upright for the first time in weeks 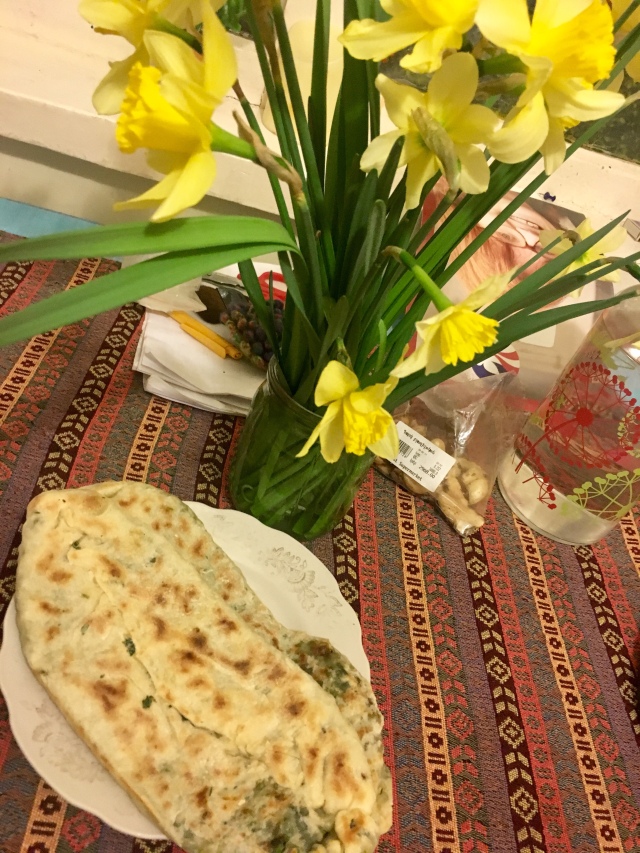 Zhingalov Hats and flowers from the garden 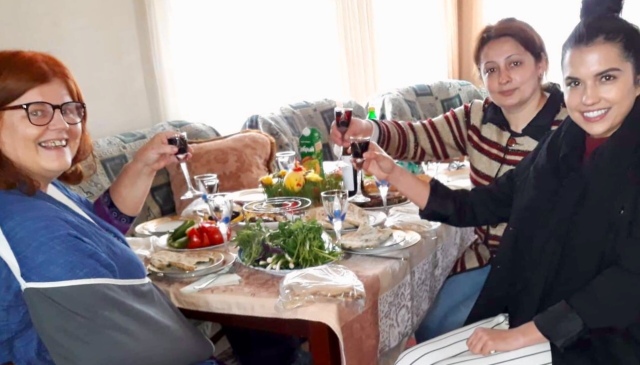 Easter lunch with Aleta and Ashlin

9 Responses to I get by…