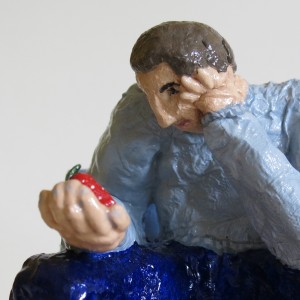 The Curly Wurly, thin in its wrapper, looked pliant and chewy, just like a real one. The Turkish delight, made in felt, had the flaccid appearance of the actual chocolate bar. The Sherbet dip’s stem stood at exactly the right length, and the Bassett allsorts man did his multi-coloured skip across the licorice-black of a packet with lumps and bumps in all the right places. The work of art called Sweet Sendsations was, for me, the star of the Koestler Trust We Are All Human exhibition at the Royal Festival Hall. The prisoner who made the sweetie stand must have asked for family and friends to bring her bags and bags and bars and bars of chocolate, so she could model exact replicas in felt, sewing on the brand and product names, exactly as they are in the sweet shop. The end result was a piece of craft work I covet–colourful, comfortably familiar, playful and brilliantly creative. Sadly it was not for sale.   I have no idea whether she created woollen pouches to wrap the real items (unlikely–they looked life size, not thicker) , or whether she used loo roll (middles and sheets), bread, match sticks, soap and other prison materials to craft the shapes she then covered in play school squares. I couldn’t touch the candy bars, because they were behind glass, but gosh I wanted to: temptingly tactile, they melted my heart.

I also liked the multi-media egg and potato fighting (£110 unframed), and the shark  made of painted matchsticks floating in a polystyrene cage. I was blown away by the tapestry featuring embroidered characters and quotes from Shakespeare, each figure curiously alive and individual in coloured cotton silk.  The Closure of Holloway painting made me laugh out loud. There was a writhing pile of women pictured in a cattle cart being driven from the prison–arms and legs flailing through the cage bars; a cartoon representation of being shuttled from prison pillar to post. Across the roof of the old jail, some women tripped lightly towards a long ladder, carrying musical instruments. They looked light as angels.

I first began to think of my own son, who has already spent too much time on the wrong side of a prison peephole, when I saw the collage of Tupac in tiny squares of monochrome paper; the painting of Eazy-E, defiant and alone; and the joyful, colourful exuberance of a marvellous portrait of Rosa Parks. I know he would love all three. I got a catch in my throat when I got to the prison poetry, pasted on the art gallery wall. I had a flashback to Tony’s notebooks, filled with fragments of song lyrics, and attempts to capture  in written words his feelings on things he could never say out loud. Some of the poems were funny–an ode to a choccy biccie, an imagined conversation with the Queen. Others talked of rain and sunlight and grass and air. Of love and loneliness and craving and despair. They were really good–worth reading.

I was agitated when I arrived at the Royal Festival Hall. The lighting and the signage is not good on the South Bank. The cobbles jarred my creaky knees. When I got inside the building, I was confused and disoriented. I joined a queue for sandwiches before I realised it wasn’t the ticket counter where I was to meet my friend.  In the loo, there was a long line of women, jiggling. My handbag was heavy with books and a laptop and the cloakroom wasn’t open. By the time I finished at the Koestler exhibition, I felt lighter, happier, wiser, and closer to my boy than I have in a long time. The exhibition, which is free, runs at the Royal Festival Hall in London until 13th November, 2016. You’ll be glad if you go.