Hussain came to the Riad to pick me up about 6:30 on Christmas night. He wore a robe the colour of port wine and a matching fez. Real ‘wise man’ attire.  We walked past the mosque and through dark, uneven, narrow passages and talked easily in a mix of French and English. He’s 25, a Berber from the Sahara, and in Marrakech to work. One of his duties at Dar Zellij is to meet would-be diners and guide them to the restaurant. The roads are too narrow for traffic, and the zig zags  in the Northern Medina would be impossible to navigate in the dark. When we reached the restaurant he stepped backwards into the shadows. “Ask for me when you want to go”.

A second young man, this time attired in flowing white robes , walked me up (many) stairs to the roof deck where I sat in splendour enjoying the first alcohol made available since I arrived in Marrakech– a glass of Moroccan rose.

There was much about this experience to recommend– the tented deck was beautiful, opulent, serene …and licensed. Make sure to go when you are in Marrakech.

Overall, I’d suggest that Hussain, the rooftop , the Aubergine caponata starter and the Moroccan pastries at the end of the meal were the highlights. I plumped (correct if unattractive choice of word) for one of the set menus but I wouldn’t do this again. It was too much food and, although the tagine and couscous cost ten times as much as those served in the souk, there was no deliciousness differential. Indeed the cous cous on the street had more variety and interest. The posh one was heavy on carrots, a vegetable disliked by my father and barely tolerated by me. My dad disapproved of carrots as part of Christmas dinner and in this he was definitely right.  I raised a glass of Moroccan red to him as a nearly full plate of carrots and semolina was returned to the kitchen. Sorghum loser. The fish in the tagine was overlooked and dry, and it too was surrounded by carrots and only carrots. Tut.

Throughout the evening the service was attentive, polished and charming. They coped when an American from Louisiana loudly demanded lasagna which he insisted his hotel had pre ordered for him. They waited politely for a Japanese family of three– mum, dad and a six year old boy-  to look up from their phone screens before they served or cleared each course. The only “fur coat and no knickers” moment came at the end of the evening:

Bill and (American-sized) tip paid, I asked for Hussain. “Who?” said the maitre’d, a young and energetic woman who had spent much of the evening arranging candles and perfecting the placement of bougainvillea petals. “Your guide” I said, eager to avoid the word escort. “You are sure he works for us?”she asked and went off to see if they had anyone of that name on the staff. Five minutes later she came back, still looking doubtful “red hood and hat?” “That’s him” I said, and asked her to be sure he got a whack of the tip. She barely nodded. She walked me to the vestibule where Hussain was waiting. “You’ll make sure he gets something to say thank you for his excellent service?” I pressed. She scowled. “How much?” Hussain pretended not to hear. As did she.

On the way home Hussain explained he had learned French and Spanish at school. He speaks Arabic, and Tamazight. He knows a few words in Italian. He is working on his English, which is already good. He sees a big future. I hope his employer sees it too. He is an under-used asset at the moment. At least now she knows he has a name. 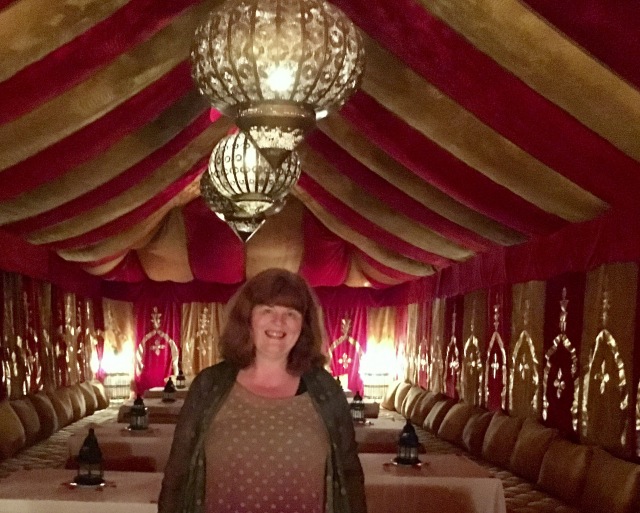 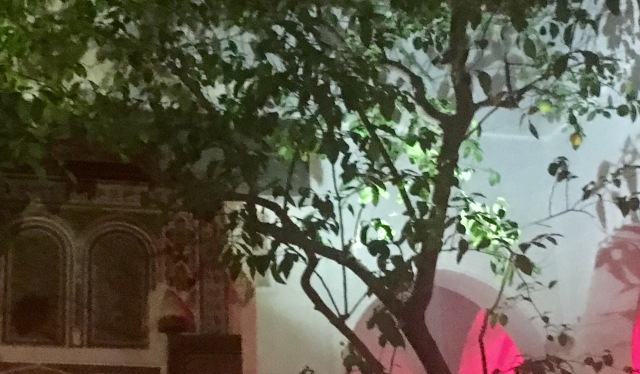 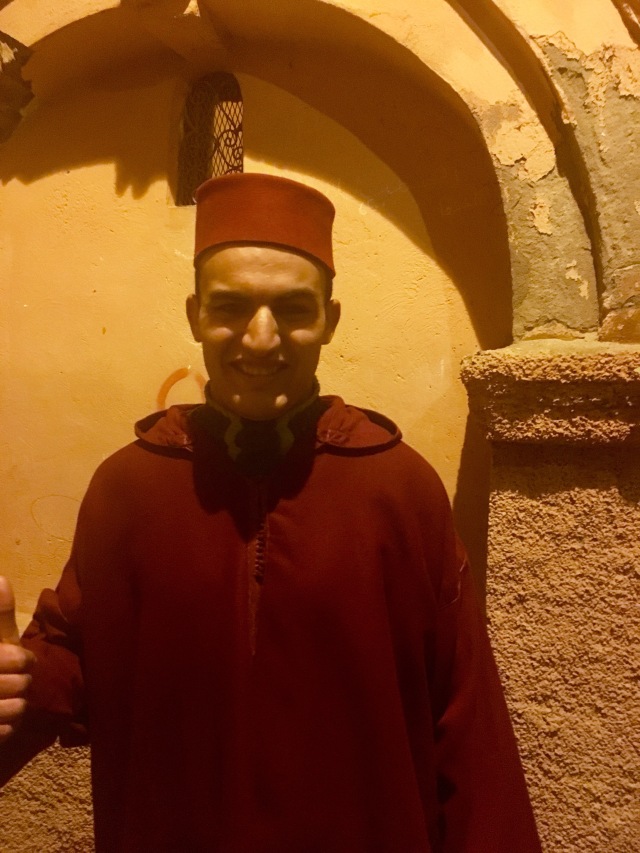