Lost for words. No happy endings. 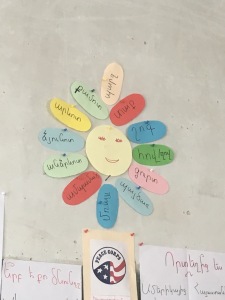 Let me start by saying that I know English is a nightmare to learn, what with all our irregular verbs and silent letters and eccentric colloquial quirks. Compared to English, Armenian is easy. Most verbs conform as though drilled by Soviet paymasters. There is none of that irritating gender stuff they insist on in French. In all but very few cases, the infinitive is used for the past tense, together with the relevant auxiliary. Armenian is a language that relies on efficiency and the exercise of common sense. Except when it doesn’t.

I am here to grumble about the definite article (TDA) and a couple of other irritations designed to trip up students of East Armenian. TDA is an eh sound when its noun ends with a consonant. It is a nuh sound when its verb ends with a vowel. These grunts are heard after the end of the noun, and before the verb and auxiliary. Are you with me so far? This is where it all takes a turn for the worse.  The pesky definite article attaches to proper names when the person bearing the name is the subject of the sentence. So no Liz but rather Lizeh. No Sara but rather Saran. Or Sarahn because the wretched h is silent, although very important to its owner. Elsan oorakh e. Elsa is happy. Elsan im inkereh e. Elsa is my friend. Inker also takes you know what, because of the possessive. Who knows why? Not me.

In Armenian, when you talk about a place, you add um on the end.  We had this dinned into us early on. I live in Washington DCum. I study at schoolum. I spend time at Peace Corps HQum. But of course , most of the time one talks about a place, it is because one is going there. Except then of course the bloody um, um disappears. “Direction. No um” says my teacher Sona (also known as) Sonan several times a day. I fly to Washington DC. I walk to school. I go to Peace Corps HQ on Friday. No um.

And don’t start me on plurals. If I talk about volunteers doing or being something I  say khamavornereh. Plural ending for multisyllable word and TDA tacked on to the end of the noun. If, however, I specify two volunteers, or any number of volunteers, the plural mysteriously slips away. Yerkoo khamavor. Two volunteers.

I have been known to showcase TDA and my knowledge of plural endings when discussing shopping lists. The beetroots, the eggplants, the mushrooms. “Why would you use the plural and TDA?” asks Sona, mystified. “But you said….?”  “Yes, but not at the shuka or supermarket. Not necessary”   Well, that’s cleared that up then. It’s just like English. I need beetroot, eggplant, (but) mushrooms.

Then there’s the negative, which swims around in a sentence depending on whether it applies to a verb or an an adjective. Ch’em siroom kaylel. I don’t like to walk. Sovatz ch’em. I am not hungry.