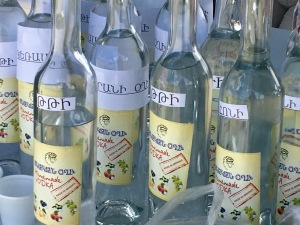 Robert zoomed by his mother as she was painting her nails. He knocked the coffee table with his toy truck and nearly sent her bottle of blue nail polish flying. “Don’t do that” said Aleta. (She says it a lot. Robert pays no attention. He is four years old and bashes on, unrepentant and undeterred.) չի կարէւի. Ch’ kareli. Don’t do that. It was the first phrase I picked up when I moved in here.

Grabbing her son, Aleta pulled a piece of cotton wool from the roll in front of her and soaked it with vodka, a bottle of which was also on the coffee table. “Come here” she said. Արի Ari! Then she wiped Robert’s sticky face and grubby hands with the wet wad, scrubbing hard. Next she yanked off Robert’s dusty shoes and gave them a good going over with the vodka wipe. They came up lovely. I must try it.

Vodka is cheaper than bottled water here. Aleta’s bottle had a commercial label but it may have been refilled many times over with spirit distilled from local produce. Should you ever drink vodka in Armenia, certainly don’t trust any label unless you see the seal broken on the bottle. It could be anything in there. For all I know, this particular vodka had also served as nail polish remover. You have been warned. 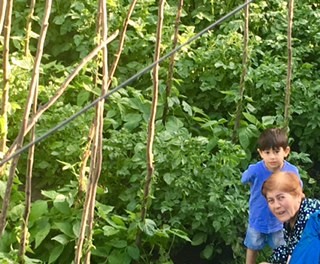