Arts in Armenia: A Beginner’s Guide

Hooked on Trivia? Compulsive when it comes to crosswords? Proud of your performance at the pub quiz? Don’t risk being caught out by a question on the arts in Armenia–it could come up at any time. I am as fond of a general knowledge test as the next nerd, but I will confess that, up until very recently, my mental file on all things arty in Armenia was very slim indeed. I could still easily be stumped but, in a spirit of information-sharing, I pass on such knowledge as I now have. At the very least, it may help you set fiendishly difficult questions for your foes. Ch’argi. Ձարժե It’s nothing. Khantrem. խնդեմ You’re welcome.

Artist: Martiros Saryan  is founder of the modern school of Armenian art and a painter whose pictures of the Armenian landscape you may well have seen–not least on the dress I had specially made for my swearing in as a Peace Corps Volunteer.  My favorite thing about the 1923 painting is not the depiction of Ararat (although I DO love that mountain), but the women dancing at my hem (there is a detail below). Women and music, plus mountains were a bit of a theme for Saryan. He lived from 1880 to 1972 and was awarded the order of Lenin 3 times. If you are unable to see me and my dress, you can always visit the M. Sarian House-Museum in Yerevan where many of his paintings are displayed. 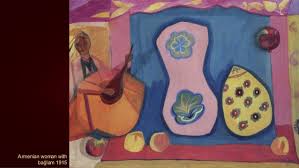 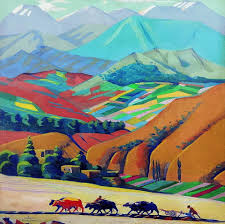 Fashion Designer: I love the work of Edgar Artis  who designs dresses using every day objects. Will my next special occasion dress be made from salad–or pencil sharpenings? Follow Edgar on Instagram to see all his fabulous creations. 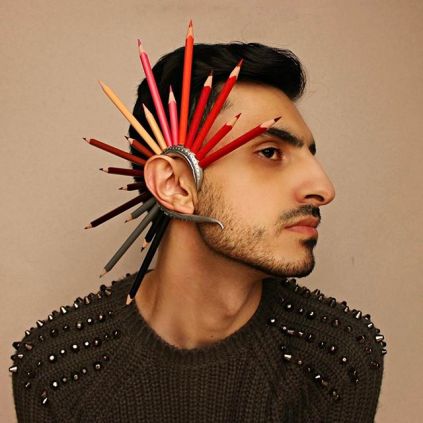 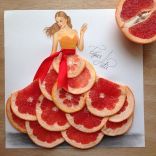 Literature: The big daddy of the Armenian writers is William Saroyan who, like those pub quiz staples Oscar Wilde and George Bernard Shaw is famous for saying lots of wise and memorable things, many of them contradictory. If you need a quote about writing, madness or being Armenian, he is your man. He won the Pulitzer prize in 1940–his is a handy name to know if you are asked to list five such winners.  He is quoted at the end of the Armenian film “The Promise”.

“I should like to see any power of the world destroy this race, this small tribe of unimportant people, whose wars have all been fought and lost, whose structures have crumbled, literature is unread, music is unheard, and prayers are no more answered. Go ahead, destroy Armenia . See if you can do it. Send them into the desert without bread or water. Burn their homes and churches. Then see if they will not laugh, sing and pray again. For when two of them meet anywhere in the world, see if they will not create a New Armenia.”

You can check out some of his other quotes here 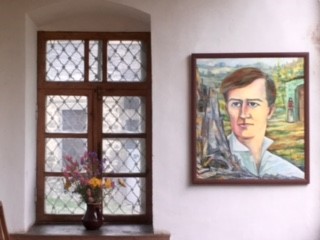 Poetry: I want to give a shout out to Goris’ local boy made good: Axsel Bakunts, a poet and short story writer born in Goris in 1899 and killed on Stalin’s orders in 1937. His crime: alienation from socialist society. As a schoolboy in Goris, Bakunts was first arrested at the age of 15, for satirising the town’s mayor. Not much of Bakunts work is published in English–or if it is, it is not available online, or here in Goris. Wondering how Bakunts’ writing compared to that of Jonathan Swift or Flann O’Brien, two great Irish satirists, I asked my Hayeren tutor, a native of Goris, if she knew what Bakunts had said that so enraged the town. “Probably no-one read it” she said “It was just talked about, and that was enough”. Interesting to discover that sort of thing happened even in an age before Twitter…

Here in Goris there is a rather lovely small museum commemorating Bakunts, in the house where he was born. In addition to displays of many artefacts, paintings of his mum, and so on, there is also a beautiful garden where would -satirists can sit and think creative thoughts. 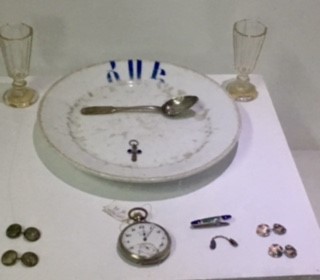 Film: The Golden Apricot Film Festival takes place in Yerevan in July and so presumably my knowledge of Armenian cinema will be broadened beyond The Promise, this spring’s Hollywood take on the Armenian genocide. The film, though hamfisted and with a couple of story twists of dubious morality (tut), is worth seeing. I didn’t need a hanky though, except to stifle giggles.

Music: The Armenian duduk is to Armenian music what the uillean pipes are to Ireland and the banjo is to Bluegrass. This wind instrument made from apricot wood could be useful to know if your Jeopardy category is music for 500. A contemporary of  all the chaps above is Soghomon Soghomonian, ordained and commonly known as Komitas, (Armenian: Կոմիտաս; 26 September 1869 – 22 October 1935) an Armenian priest, musicologist, composer, arranger, singer, and choirmaster, who is considered the founder of Armenian national school of music. The wailing noise of the duduk is the soundtrack for Komitas’ tragic life. Captured and deported by the Ottoman government during the genocide, he did escape with his life, only to suffer post traumatic stress disorder. He lived the rest of his days in terrible torment, in and out of pyschiatric hospitals. You will need your hanky for this music.

Martin Mkrtchyan, a sort of cross between Tom Jones, Daniel O’Donnell and Donny Osmond, manages to be much more cheerful. Recently, Elsa and I watched a recording of a big concert he gave in Yerevan’s Republic Square at New Year. Good stuff.

Much as in Ireland where I grew up, most of the songs in this ancient country but new and vulnerable republic are nationalistic–about the beauty of the land, the value of birthright, and courage in the face of enemies. It’s like living with the Wolfe Tones. The song below was sung to me by Arsen, aged six. He pumped his fist and cocked his imaginary gun as he sang. Boys here must go to be soldiers when they graduate high school and Arsen is already ready for the fight. I hope that here, as in Ireland, they will reach a level of security and prosperity that will allow their young singers to write of something other than threat and loss and war. More Snow Patrol than Stiff Little Fingers, if you like…

There is one well-known song that has an unexpected link to Armenia–Rosemary Clooney’s Come ona My House. This, it turns out, was written by the aforementioned William Saroyan and his cousin in 1939 as they motored across America.  Once you know this, the plums, apricots and pomegranate in the lyrics make complete sense. The cousin later went on to have great success as one of Alvin and the Chipmunks. Saroyan wrote no other popular songs. Now if that isn’t the stuff of great trivia quizzes I don’t know what is. Listen to Rosemary and enjoy.