So what do you do there anyway?

I spent the 4th of July cutting out pictures of hamburger buns, cheese slices and dill pickles. Black and white pictures, because we don’t have a color printer here. I used the pictures to teach an English conversation class about the American holiday. Students–five women aged from 15 to 50–order a burger with their choice of extras from me. Then they show and tell what they will eat. Bacon strips, tomato, red onion slices, ketchup, mustard and french fries were among the options. I left out lettuce. No-one likes lettuce and the word is not used here. I play a short video of my colleagues singing the Star-Spangled Banner. We wrap up when everyone can say stars and stripes and point to the right images on the flag. I am not actually here to teach English, although a lot of volunteers are. But English lessons are valued in Armenia and random people, hearing an American is in town, will turn up to ask to talk and learn. I am happy to help. Some of the women I have met in the last month in Armenia blow me away with  their poise, determination and capacity to learn. Say magic words in English and you can conjure up a glorious future. They are determined to master the language.

At home, my family made a mattress. When I woke up in the morning, wool not long shorn from the back of a sheep, had been washed and hung out to dry. Later, it was laid out on top of an envelope of hotel-white sheeting. Much patting and teasing and prompting ensued, until the cloth was covered in a four inch thick mat of the unruly wool. Deft rolling and squeezing and pummeling and Aleta and Karina had wrangled the wool into its new cover. The quilt was rolled and carted upstairs where it was laid out on two dining tables–extensions added–and sewed with string to stop the wool shifting about. It looks like the mattress of my dreams. They will make another one tomorrow. 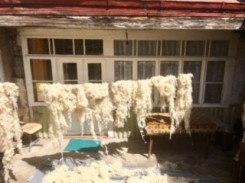 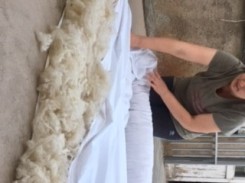 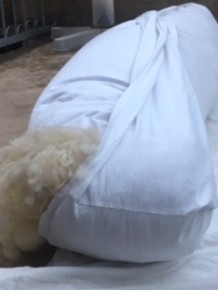 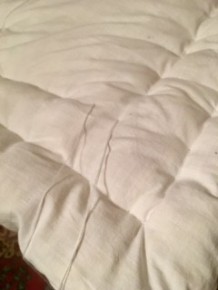 I am a community development volunteer, which means I work with an NGO. My focus is management skills and organizational development, just like it was in the states. I work with a more than averagely successful grant-funded organization which has offices in Yerevan and here in Goris. P&T NGO wins and administers grants from organizations including USAID, the European Commission, UNHCR, sundry foreign administrations and various branches of the Armenian national and local governments. Most of our work concentrates on civil society development training we provide for other, smaller NGOs. The training–in NGO management, Social Entrepreneurship, Communications and PR, Financial Diversification, Fundraising, Project Design Management, Managing Volunteers and Members, and  Advocacy–is first-rate. Practical, engaging and very hands on. I, of course, cannot facilitate, because my Hayeren isn’t up to it. This means I concentrate on trying to improve office processes, and on PR work.

Haykush is up at  6 o’clock to clean our office. She takes care of the kitchen and bathroom, dusts and tidies the desks, empties the waste bins and sweeps and stairs and outside areas, front and back. On her way to her day’s work in the garden, she stops to stir the vats of mulberries outside my bedroom. The berries are fermenting nicely now. Haykush has beans to tend, fruit to pick and seedlings to thin. Later, she’ll make yogurt. 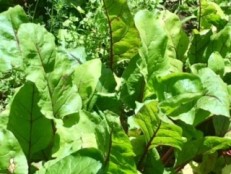 God knows, I am not great at systems but I have learned the hard way the value of thinking first and doing later; of labeling files and folders by date and name; and of storing only the most updated version of materials to be used for publicity. I try to touch things only once, committing to finish what I’ve started, and attempting to answer questions before they are asked. In the States, I am at the back of the class when it comes to this sort of order and organizational ability. Here, my colleagues  consider me pedantic, process-oriented and positively nit-picking. Somewhere far away from Armenia Jacqui Barrett, Natalia Banalescu-Bogdan and Caela Coil are rolling their eyes…

Artur is spreading concrete on what will be the floor of my new shower. Next he will grout the floor tiles before doing a taxi shift. The work on the bathroom has been held up. We had heavy rain and our roof sprung a leak he had to fix. He needed to drive to Yerevan to get something to make the shower drain better. The next-door neighbor is too old to climb his own mulberry tree–Artur must stop his remodeling to help with the harvest.

At work, I write strategy documents in English and share them with my colleagues on Google Drive. Everyone here mistrusts Google Drive more than they mistrust lettuce. I can’t say I like it myself, but it is one way to make sure everyone is looking at the same version of the same document. Not that anyone reads my strategy papers. Even for those fluent in English, they are too fatiguing. I don’t blame them.

Natalie has cycled across town to meet her friend Sarkis. They are both teetering on the edge of puberty. Next summer, will she ride her bike? Next summer, will she be allowed to see Sarkis? Diana does her hair and her make-up and then does it again a different way. She is 19. Robert is outside playing in the street just as a four-year-old should be.

I come up with ideas to increase our visibility and illustrate our impact. We are having a big conference next Monday–200 people. We decided on the title the day before yesterday and we finalized the announcement in English, Hayeren and Adobe Indesign late last night. My friend Emily at the other end of the country has Indesign on her computer so I asked her to give me a couple of hours of her graphic design expertise. Two exhausting days later and everyone was happy. Thanks Emily.

The conference will pull together representatives from business, government and the NGOs we have been working with. I have drafted a press release for translation and want to start the conference with challenges to sector teams to attach themselves to each other with ribbon in the colors of the Hayastan flag. I can see it all now: executives and social workers and elected representatives knitted together by Armenian colors threaded through bracelets, down shirt sleeves and around ankles.  It will give the TV crews something to film I tell my colleagues. They look at me in bewilderment. This is more than a language difficulty.  They think I am crazy and ridiculous. By now, Jacqui and Natalia and Caela are nodding in agreement. This is the Liz they know.

I coached the female executive director of a NGO in Yerevan by skype. Another young woman who speaks perfect English. I coached another volunteer on managing her emotions as she settles into her new life in Armenia. I decided to call it a day. 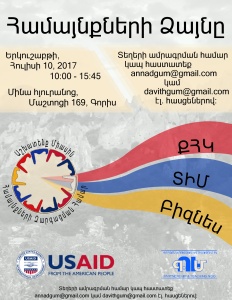 Aleta spring-cleaned the living-room. She took down the curtains  and washed all the windows with vodka and crumpled paper. Yards and yards of freshly laundered netting to be rehung. She made a tray of pound cake and a small batch of raspberry jam, before our raspberries spoiled. I joined her and Karina for cake, jam and tea after watching the exhausting business of the mattress. The cake was cut in perfect diamonds and the jam was still warm. This is what we do here.

4 Responses to So what do you do there anyway?