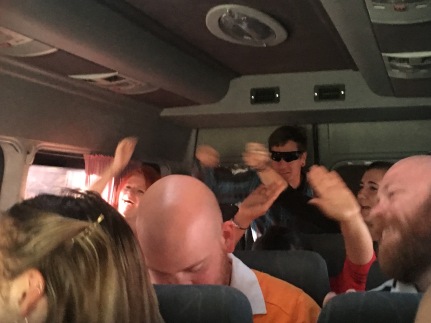 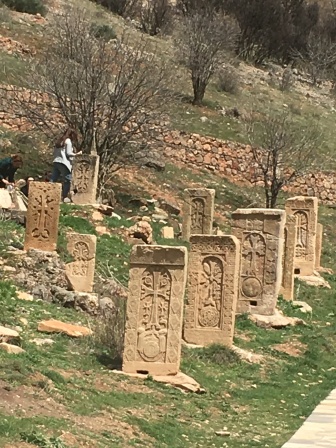 We are not allowed to travel after dark. We may not leave our villages without permission. We will never drive a car in our country of service. The rules governing the lives of incoming Peace Corps Volunteers are strict and exist because of painful experience gained all over the world. When we need to venture further than the local school for a Peace Corps activity, we are driven in a Peace Corps minivan and returned home safely in the late afternoon. This week though, we had enough language to strike up a new relationship with our driver, and so we now have an eclectic mix of music as we ride. We have car-danced to Gangster Paradise, and some folky Armenian pop. I was astonished to find myself singing along to the Eagles’ Hotel California with a van load of 20 somethings. I, of course, know all the words, but would have been prepared to hide this knowledge if it would have helped my image any. I needn’t have worried: they all knew it and sang loudly with no apparent irony. The old, denim-clad and hairy must be new again? The millennials also sang along with Celine on My Heart Will Go On and On. I sat that one out. A girl knows her limits.

We went to Norovank, an ancient church and monastery built on a hill and surrounded by deep gorges and snow-topped mountains. Norovank was built by one of Armenia’s most esteemed architects, Momik, back in the 13th century. Legend has it that the king challenged Momik to build the church if he wanted to marry the king’s beautiful daughter. Momik was keen on the princess and so rose to the challenge. Sadly the marriage never took place although the church still stands: Momik was killed by the king once the building was completed.

The church is still used today. It has two stories, the second of which is reached by a set of perilous outdoor stairs. The graveyard is filled with ancient engravings—celtic-looking endless knots known as hatchkars (cross stones). Visitors come from all over the world to see the engravings, some of the few that survive from Momik’s time. In taxis from Yerevan, they grumble about the distance and the need to inhale hard for oxygen in the high mountains. Why are there no historic sites on accessible main roads, they ask with a gasp. On the way to Norovank, we crossed a peak from which it is possible to see the mountains of Iran, Azeri territory, and Turkey. This small country’s neighbors live close at hand and over the years have often turned up uninvited. They have not always left Armenia quite as they found it. Across the years’ many of Armenia’s apostolic Christian churches have been raided and looted and destroyed and so it is only the most remote and mountainous that survive.

Later in the week, we had a field trip to a second ancient site—Khor Virap. This used to be in a remote location, but now finds itself less than 10 miles from the Turkish border. Things change, though GPS coordinates remain the same. Here is where the man later known as Saint Gregory spent an uncomfortable 13 years imprisoned in a narrow, dark, underground well. A widow fed him from time to time. The king who had imprisoned 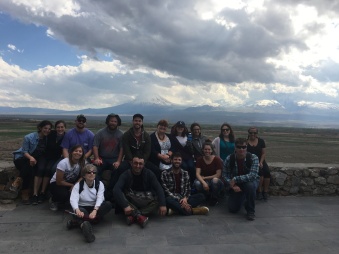 Gregory eventually went mad, as those with evil ways are prone to do. The widow mentioned that it might be a good idea to free Gregory. He was hauled out of the pit and immediately, and rather generously, returned the king to health and vigor. The king wisely decided to throw his lot in with Gregory and together, back in 301 AD they made Armenia the first Christian nation. The first church was built on the Khor Virap site in 642. The one that stands today dates from 1622. We saw twins christened at Khor Virap. They both screamed lustily throughout. Gregory was also known as Gregory the Illuminator. You can buy a copy of his biblical illustrations at the gift shop, along with some hirsute dolls in Armenian national costume.

On the home front too, there has been a lot of toing and froing this week. Lala, the newly married daughter is home from Moscow for a few days. Her husband didn’t come. He is a decorator and is busy with work. On Easter Sunday all of the Ararat region seemed to visit the graves of family members, sitting in a village traffic jam to get to the cemetery. In low-fenced plots, men lit small fires in metal pans and sprinkled incense on the flames to honor the dead. Women placed flowers, mostly carnations, at the foot of gravestones engraved with life size photos of the lost. It is important that the flowers are left in odd numbers—usually bunches of three, or five or seven. 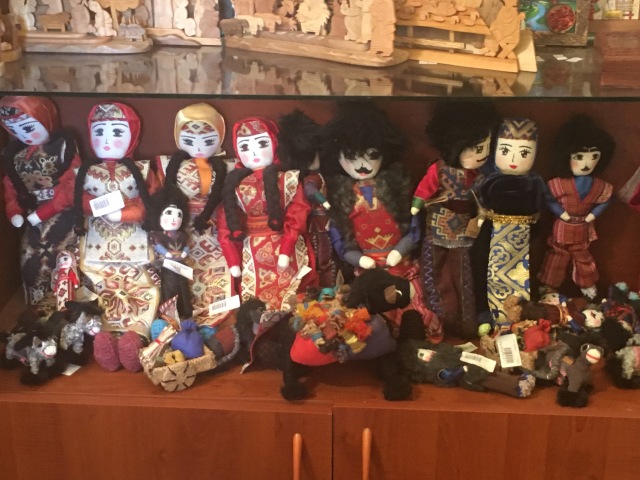 There were more than 30 people at our house for dinner. Elsa had been preparing for some days: fresh water fish, and Easter pilaf—rice prepared with butter and raisins—plus the usual herbs, tomatoes, cucumber and chopped salads. Bowls and bowls of eggs, dyed a rich brown with onion skins and then decorated by me with my favorite gold Sharpie and some chicken stickers I brought with me from an American craft store.

A fellow Peace Corps Volunteer who rooms with Elsa’s sister was seated with me at lunch. We and a couple of doughty Aunts were put at the end of the men’s table. For us, homemade red wine was poured into tiny cordial glasses which we drank daintily. Hanna and I refilled ours as often as we decently could. I probably had 13 thimblefuls by the end. Not enough to do any harm. The men drank vodka shots with their meal. Vodka here is cheaper than bottled water and is often 75%. That’s percent, not proof. It’s rocket fuel and by the end of the lunch there were casualties. A couple of Elsa’s good tablecloths will never be as white again.

In the kitchen at the (real) ladies’ table, alcohol was not served. Many pastries and chocolates were consumed with strong black coffee in exquisite, tiny cups. For women, any kind of drink, hot or cold, seems to involve fairy-sized receptacles. They are strangers to mugs. At the children’s table in the living room, kids knocked hard boiled eggs together end to end to see who could break whose—it seemed to be a good luck thing, combined with a “mine is better than yours” type challenge. (Think conkers if you are British.)

Tonight (Sunday) the house is full of people again. They have been coming in waves from about 6pm, more than 30 across the evening. Elsa has yet to sit down. First we had dolma—ground beef, onion, garlic and rice wrapped in cabbage leaves and steamed—plus greens that looked like groundsel cooked up with egg. This was served with lavash and the usual salad bits and pieces. Acorn cups of sweet wine for any woman who wanted it. A bottle or so of vodka for each of the men. Coffee and homemade cake with chocolate butter frosting and a banana and chocolate cream center. Coffee was served. Then a shift change—a raft of neighbors replaced relations who had to hit the road for home. Tea with lemon, a refreshed plate of cakes and fancies. About 9pm a third contingent turned up and the salads appeared again, plus a yogurt drink—Tan—served cold with fine -chopped scallions and cucumber. (Refreshing but keep the Colgate handy.) Women are sitting in the kitchen eating black sunflower seeds—they nip the kernels with their teeth and then place the husks on the side of their plates in a ladylike maneuver I have yet to master. No spitting is involved. In the hallway, Geovorg continues to entertain the men who come and go, smoking and drinking vodka shots with them all. He appears completely sober. I don’t know how he does it. 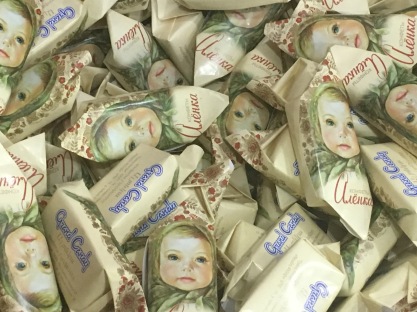 I am the only one who has to get up tomorrow. Everyone else is at home because it is commemoration day for the 1915 Genocide. On Friday, our group of volunteers went to Yerevan to see the memorial and to visit the museum commemorating the deaths of one and a half million Armenians at the hands of Turks who, facing the downfall of the Ottoman Empire, wanted power and land a century ago. World leaders plant trees at the site. Armenian school children lay flowers at the eternal flame. Holy music plays. On the way to the museum, we sang and danced in the bus, causing the van to shake. After the tour we stood in silence and looked at Mount Ararat from the roof of the museum, the enduring symbol of life and land that was lost. We didn’t sing on the way home.