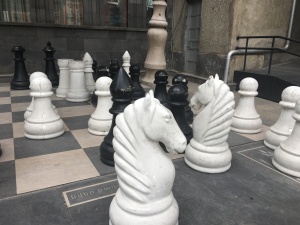 I have had three chess lessons now, so obviously I am in a position to post about the game. And I am not a complete newbie. Goodness no! I have played chess before–or thought I had. Years ago, my father taught me the method of movement for each piece and, since then, battalions of  my rooks, bishops, knights, and pawns ( plus a tired old Queen or two) have languished in graveyards run by my opponents. I have never enjoyed much success traversing the 64 squares, and I have never understood why.

That was before I met Ara. Ara can win blind chess on three boards simultaneously.—good going even in Armenia, where everyone seems to be a whizz at chess. Ara is a man who likes a challenge, which is why he is now my chess teacher. The night of our first lesson, I  set up the board, proud that I knew the order of the pieces, and careful to put each Queen on the square of her own colour: no dozer me. Ara’s first instruction was to put the pieces back in the  box. We spent the first half hour looking at the empty board, identifying A8, F3, H6 and so on, pretending to be first the white and then the black player. “I’m sure I will never play blind” I demurred. Ara looked as though he agreed but he said only “You need to be able to read the board, to know where you are, to be familiar with the terrain”.  It turns out there is a lot more to that board than I have ever noticed before.

Ara demonstrated how chess defies the laws of geometry. In most triangular situations, travelling along one side, is shorter than zig-zagging to the same end point across the other two. Not in chess. If it is 6 squares in a straight line (white and black) it will be 3 on each other side of the triangle (either black or white). Ara’s first point is that there is always more than one way from A to B, and very often they are the same length, even if your brain tells you otherwise. Again, my hand itched towards the box of Royal Family members, and their hangers on, but it was still not time to play. “We will start with the end game” said Ara. “In chess, it is important to have a plan, to know where you want to get to. We will start at the end, and work back”. I have heard this sort of thing said before of course, in reference to professional strategy, career planning and so on. I  am more of the plunge in and muddle through school of thought. Ruefully, I must admit it has not served me well.

Ara put two kings and a white queen on the board. “You’re white–make a move” he said. Of course I put his King in check. That’ll rattle him, I thought.

“Why did you do that?” Ara asked, in a reasonable tone of voice.

“Because I could and because I thought it would get to you” I replied. ( I hardly liked to tell him that , until now, this has pretty much been my life’s philosophy)

“But it is a waste of time. It is not check mate. Watch and wait. Don’t bother with check until you know how you will end the game”. Petty spite–pointless? Planning ahead and biding your time: important. Who knew?

Ara showed me how to use a King and Queen together to maximum effect, seeing the 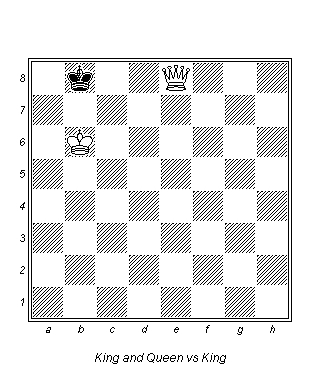 board as a series of boxes within boxes. “You want to shoo him [the black king] to the side of the board and then into a corner. You always want to be giving him less and less space to operate in. You want to control where he is able to go.” 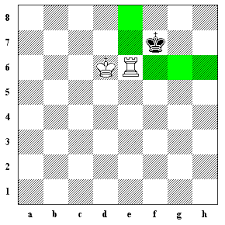 Ara’s view of the board as boxes within an 8 by 8 frame is eye-opening to me. Once he points it out, it is hard to believe I never saw it before–too busy pushing forward towards the other side of the board, I failed to notice that the game is more effectively played if you can narrow the area where action ensues.

We then discussed how to avoid a draw. “Think. Make sure he is in check before you move too close. If he cannot make any move you have wasted your time. Wasted your advantage. You have a draw. No-one wins.” Again, this advice seemed to have a certain resonance when I paused to consider my love life, my family life, and my career. Being sure I am right, I close in with reckless speed only to find that I have overlooked an important, game-killing detail. Apsos as they say in this part of the world: what a pity.

The next time we meet, Ara introduces the rook and sets up scenarios where the white rook and his pasty king must wipe out the black king, who  is working alone. “Keep the rook and the king close together” cautions Ara. “Shoo your opponent but make sure the King has the rook’s back.” We two-step across the board, the Black King’s territory shrinking with every other move. Once he is safely pinned against what I now think of as one of the number walls, Ara introduces the concept of the waiting move. We discuss scenarios where the demise of the luckless black king is inevitable–if only the white rook knows how and where to withdraw close to a letter edge, lurking in B 1 or 2, or B 7 or 8.  Again, a frustrating draw must be avoided, and the rook must use his vertical powers to keep the black king shuttling up and down the edge of the board. The  white king follows him patiently,  two squares over– C–and one step behind.  “Let him come to you” says Ara “he gets to the corner, and then he has to come back. When he is opposite your king, move your rook horizontally to A. Check mate”. A waiting move? A tactical withdrawal? I have never contemplated such a thing. In chess, as in life, I have stabbed away at enemies a thousand pointless times,  never to deliver the killer blow.

This video doesn’t feature Ara, but does illustrate the rook endgame.  Well, you can’t have everything.

“Playing chess will make your life better” says Ara “It’s logical. It will sharpen your mind”. Well, maybe. But chess with Ara has already changed if not my life, then my view of my life so far. I have a new awareness of failure to read the landscape, blind enthusiasm, short-sighted moves,  and inability to partner, plan and wait. Now if I can only remember and practice what Ara is showing me, I may yet prevail, both on the black and white squares, and on the bigger board where I’ve careened so carelessly up to now.

It was finally  time to put all the pieces on the board, not to play Ara, but his 8-year-old son. Davit won of course and it took him only 10 minutes. Galling.

2 Responses to Queening Around