You will not have heard of St. Gregory the Eliminator, because he doesn’t exist. This is a shame, because there are so many occasions when one needs a light-sabre-rattling Star Wars-style Saint, ready to avenge all wrongs. St. Gregory the Eliminator is what Richard heard when his Belfast-born guide to Armenia–me– spoke of St. Gregory the Illuminator, who is–or was–very real (227-331 AD).  It took some time to sort out the misunderstanding and we both ended up rather missing the Saint who never was. There are three things you need to know about the real St. Greg:

Richard’s bafflement didn’t begin and end with Gregory. Our cultural tour of Southern Armenia demanded that he learn to love the following characters, good eggs all.:

In a way, it was rather a relief to get to Karahunj, Armenia’s Stone Henge, because no-one knows who built it or how. Normally, the wind whips through the stony site,  but on the day we were there everything was still and clear.  The Armenian name Karahunj means Speaking Stones because of the whistling often heard when the wind blows through the perfect rounds bored at the top of the heavy rocks 7500 years ago. No-one knows how the holes were made, or why, for the Speaking Stones have kept their secret since prehistoric times. Archaeologists with rulers have squinted at the skies and speculated that the site was an astronomical observatory. Certainly, there are burial sites there, and what might be the remains of a settlement. There have been a couple of small excavations at Karhunj, but nothing major. One of these days someone will have the money to commission a project to discover as much as we can about one of earth’s last great mysteries. But for now, the Stones stand undisturbed. Unlike in Britain, there is not a busy main road or busloads of tourists visiting the ancient wonder. You can wander where you will. 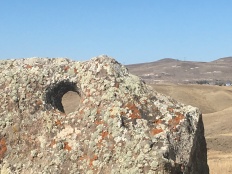 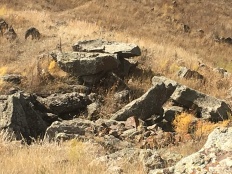 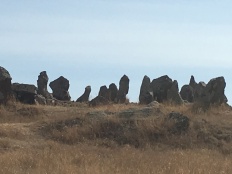 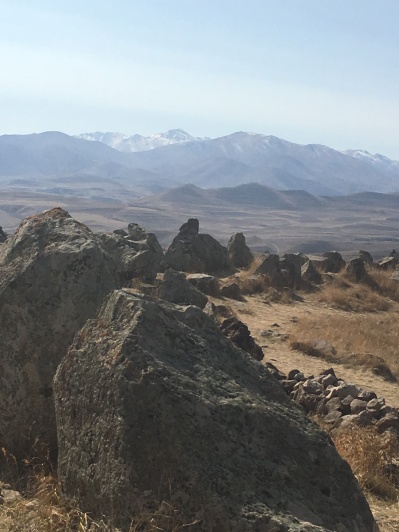 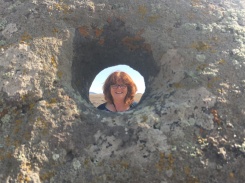