The road to Lor

“Come” said Laura, my fellow Peace Corps Volunteer. “Come and see my school–no-one ever does”. I readily agreed—I had looked at a map of Syunik marz, and seen that Lor was only 52 km from my home town. Google Maps blithely reported that the journey would take one hour twenty minutes to complete.  They’d probably be right, if there was a proper road. 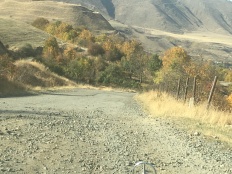 The road through the mountains after Vorotnaberd has not seen the tarmacadam truck since Soviet times. Extreme weather, limestone erosion and cloven foot traffic have all taken their toll and so the so-called road is steppes of shale, pitted with potholes the size of lunar craters. We zig-zagged warily and wearily passing cows grazing on our side of the hedgerow. The only cars we saw were those abandoned to rust. Apparently there is a bus to and from Sisian once a day–a journey of about 20 km each way. It can take two hours coming, and two hours going.

Ah, I hear you mentally deduce: this is a remote village in terminal decline and there is no earthly reason to go there. Why would the government spend money on a road to such a place? 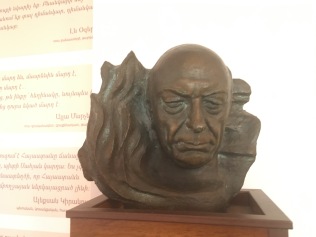 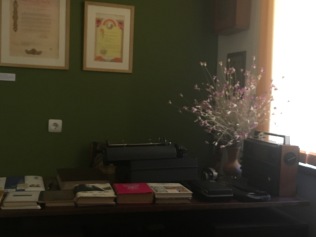 Well, it just so happens that the village of Lor was the birthplace of the acclaimed Armenian writer Hamo Sahyan and now boasts a very handsome, newly constructed museum celebrating the poet’s life and work. It is a fabulous museum, but no-one can get to it without risking a burst tire, broken muffler and near-terminal  travel-sickness. The museum’s curator is Konkush, a local woman and passionate fan of the hometown poet. Sahyan’s son raised the money for the museum. Sadly, with the road as it is, Konkush may be presiding over a folly.

To get to Lor, it is necessary to pass through Darbas, a village nestled between layers of mountains as though fruit in a basket surrounded by napkins. In Darbas, as in Lor, most of the houses are boarded up and locked. Families have been forced to leave, because there is no work, and it is   just too hard to travel by the non-road to  Sisian–even if there was work to be found there. A local family made it big in Russia and decided to build a new church for Darbas–the fourth in the nearly empty hamlet. Again, it is a thing of beauty, but hard to believe it is an answer to the locals’ prayers. 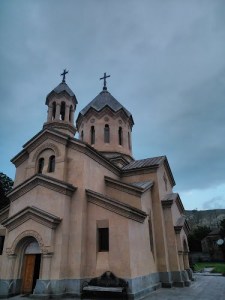 The view from the moonscape highway over the village of Shamb is picture perfect–the sort of scene you see in Swiss postcards or Austrian travelogues. But this small town on a clear, cold lake is suffering because there is no way for tourists to travel there.

I am glad I went to Lor.  I’d like everyone to go. I am beginning to wish I was the kind of Irish American that was good at digging roads. That’s the kind of volunteer they could really use around here.