The children of Lor?

46 children attend school in the village of Lor in Syunik Marz, Armenia. There are twelve forms, 0-12, with a scant handful of children in each. 46 is fewer children than last year, and more than next year. Worldvision, a global charity, paid for the school to be refurbished in 2009. It is a beautiful building and very well kept: there are pot plants in every window, and art works on every wall. There is a computer lab, and a well-equipped science classroom. It is a shame that in a very few years, unless things radically change, this school, like the one in the next door village, will lie empty. Like most of the houses in Lor it will be locked and abandoned. No one will come there anymore.

Depopulation has long been a problem for Armenia. A century ago, as displaced Armenians made it here from what is now Turkish land, many others took flight to America, Spain, Lebanon, Syria, Iran and anywhere else that would have them. All were eager to build a better future. Most felt lucky just to have escaped with their lives. Other waves of emigration have followed: Azeri families hounded out of their homes in Armenia in retaliation for similar purges over the Azerbaijan border; economic refugees to Russia, Europe and the US–people desperately seeking work.

It is not that Lor is unlovely. On the contrary, it is in a beautiful location in the mountains and, on the day we were there a golden sun shone on corrugated cow sheds, apple trees, cabbage fields and the church, built in 1665. 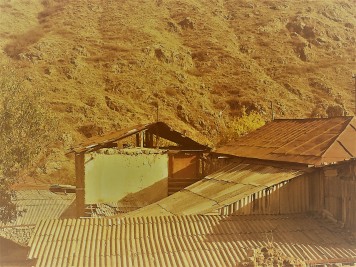 There is a smart strain running through the people of Lor, no doubt about it. The village spawned the well-known mid-20th century poet Armenian poet Hamo Sahyan. The school in Lor had a girl selected for the American Councils for International Education’s prestigious FLEX exchange program a couple of years ago–beating stiff competition from all over the country. They have a boy lined up to compete for a place next year.  The village is a victim of its own success. Young people leave to go to university and are never seen again. From Konkush, the local docent at the museum, to the fifth grade girl I saw singing and reciting with great presence at the school’s Autumn show, these are people with education, intelligence, grace and presence. They deserve more opportunity.

Konkush and other women in Lori have black thumbs and forefingers at this time of year. Their hands are stained by iodine from the thousands of home-grown walnuts they crack. Invited to coffee at Konkush’s home, we were treated to honey still on the comb, apples from backyard trees, and plums so sweet the juice could pass for syrup. Discovering that Ara’s best friend in Goris is Konkush’s aunt’s brother (or similar), the family immediately produced a giant sack of potatoes, a bag or two of apples and a huge cabbage for us to take back with us as a surprise gift. There is not a lot in Lor–but what they have, they happily share. Like their most famous son, the people of Lor remain grateful for the beauty of their surroundings (see Hamo Sahyan poem below).

At school, the students sang, danced, recited, acted and told jokes while people from all over the village watched and applauded, sitting in the sun. There was a special rice and dried fruit dish, cooked in a pumpkin. There was harissa. There were pomegranates, nuts and baklava. Children had made masks and decorated for Halloween. Mums had baked bread. To spend such a day in Lor is a perfect pleasure. To spend a lifetime there is no longer possible. There is no usable road to and from the rest of the world. No-one wants to buy abandoned houses or rent untended gardens. The government has visited Lor to install meters so it earns money from the  water that people drink, cook with and wash in as it runs straight off the mountain, but I saw no other signs of government there. My fellow Peace Corps Volunteer has won a grant to build a small playground opposite the church, so children will no longer play on the asphalt forecourt in summer. The playground will be great–while there are still children. But without a road, an agricultural cooperative, and input from the Tourism Committee at the Ministry of the Economy what hope is there for the children, Konkush, the museum, and the families of Lor? 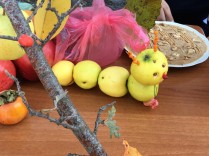 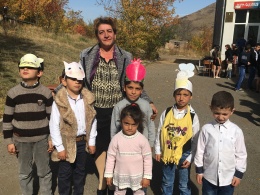 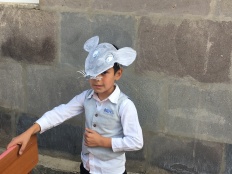 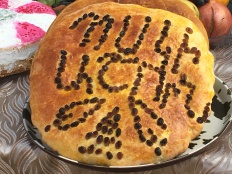