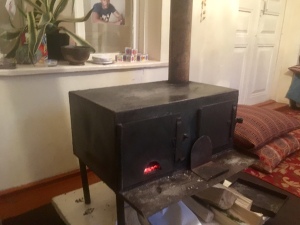 Aleta is the only person I know who can light an Armenian match. These non-incendiary items come in sad, damp boxes, with inadequate strike pads. Attempt to grip an Armenian match firmly, and its shaft will splinter as it connects with  poorly gravelled cardboard, or its blue head–the color of poor circulation–will fly off as soon as contact is threatened. But Aleta can make them work, just as she can pile sticks into a pyramid in the firebox of my wood-burning stove, add a couple of curls of paper, and conjure flame.

The stove is a welcome addition here. For the last week, I have been going to bed at 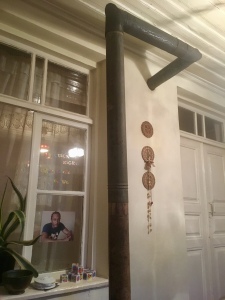 7pm under a mound of quilts, and fully clothed. My Peace-Corps-issued-four-bar-radiator was failing to make a dent in the cold and so in came the stove, ungainly, unglamorous, untidy but HOT.  Last night I toasted my toes, stayed up late, and imagined cooking in the adorable little side oven that adjoins the furnace. I would blog about my cosy homestead and readers all over the world would marvel at my skills with windfall fruit and kindling.

This afternoon, I prepared to bake apples, bounty from a friend’s backyard. To be sure, some of the cores were black and rotten, but I still had a great pile of fruit to which I added some sultanas, peach syrup and porridge oats. It was, I was sure, what Martha Stewart would do…

Now I know why I couldn’t find the kindling. Haykush took half a dozen smallish logs and brought them into the garage. Standing each on its end on a trunk stump, she attacked them with a fearsome axe, splitting each in two. She used her left hand to hold the stick, and her right to wield the axe. I couldn’t look.

Like me, Haykush has no truck with Armenian matches. She showed me to a C.S.-Lewis-like cupboard on the other side of the chicken run. Turns out, it hides a stove that sends hot air up a pipe to heat the whole house upstairs. She filled a shovel with molten ashes and ran with it through the garage to my furnace. That woman has Olympic-standard balance. I envy her.

Haykush dumped the smouldering ash on the faggots in my firebox and leant low to blow on the fingers of flame. “You’ll be ok now” she said. Then we both smelt the sugar burning in the kitchen oven: carbonated apple crisp. I ate it anyway. 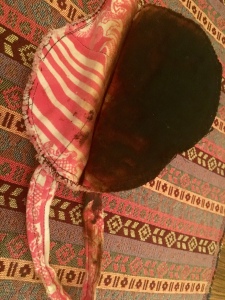 My rug is covered in sawdust. I have already burned the potholder Aleta leant me by leaving it on top of the stove until it nearly caught light. I’ve used up all the wood I brought in while it was light outside. I don’t think I have completely got the hang of rustic living. I think I’ll add the fire station number to my speed dial.