In the bleak mid-winter

We weren’t off to a good start, which was a shame as I had been looking forward to this day for weeks. I had imagined driving over mountains and through gorges with Ara, stopping here and there to take pictures of the glorious winter scenery. Visiting schools to wish the kids a Happy New Year (which comes before Christmas here–Christ’s birth is not celebrated until January 6), and to enthuse them about next year’s Poetry Contest.  Perhaps a cosy late lunch in Tatev if our  timings worked out right…

But a sea of mist covered all the lower ground, and the mountain roads were bleak and icy.  We crawled along the road to Khot, Ara doing his best to keep the windshield clear, and avoid the worst potholes as they loomed up out of the mist. The only car we saw was a green Lada which had spun off the road and into a field. 3 akbers (bros, or mates) were smoking, cursing and stomping their feet on the frozen earth as they tried to work out what to do next. Any driver other than Ara would almost certainly have banged into a second car which had stopped to see what was going on–right on the corner where the accident occured.

We encountered no other traffic.

The school director in Khot gave us a warm welcome. Her school was at the end of a frosted, muddy path but still she wore  immaculate high-heeled black boots and trousers to set off her camel sweater with pearl buttons, a coffee-coloured kerchief, and a very chic dark blonde chignon. She bade us sit at her office table which was filled with African violets in bloom.

“You’ll have Zhingalov hats and tea? “she said.

We protested that we’d eaten breakfast. Only one of us was telling the truth.

English teacher Shoghik had gathered her 12-17 year old students together so we could talk about the contest. In a warm, cheerful, Christmas decorated classroom, students recited poetry in English and Armenian. Both boys and girls volunteered to take part this spring. I mention this because in most schools the boys loaf and rough-house at the back of the class. It’s not just poetry. It’s not just English. They do it in every class and usually the teachers tell me to ignore them.

I have lost count of the times I have been told this. Other volunteers report the same. The boys have given up and their schools–and often their parents–have given up on them.

It was not this way in Khot. One boy volunteered to recite to the class, and did it very well. Another boy’s hand was the first in the air when I asked who would take part in 2019’s contest. It did the heart good.

Back in the director’s office, we were plied with thyme tea, belites–delicious puffed fritters of potato and flour–, the promised zhingalov hats, fresh fruit and chocolate. The day was looking up.

“The hot food came from our cafeteria” said Shoghik proudly “Our volunteer Cindy made the cafeteria happen a few years ago. The small children get a hot meal there every day” 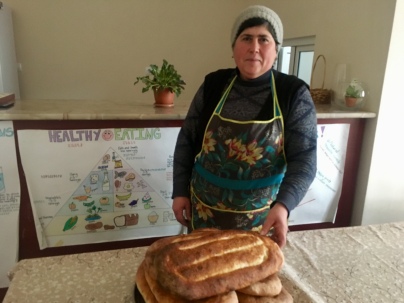 The cafeteria is funded by the World Food Program and run by a woman from Khot who takes a great deal of pride in her work. The cafeteria and kitchen was spotless. A great pot of chicken bits and pieces was on the  boil–the beginnings of a soup for lunch.

I have never met Cindy,  the Peace Corps volunteer who made this happen. I have never even heard of her. I hope someone who knows her tells her that she is still a hero in Khot, and that the project she started is still going strong, many years after she returned to the United States. Cindy’s cafe gave me a much needed boost this morning. If Volunteers get it right, our work does make a difference.  I have seen it with my own eyes.

The road through the gorge from Khot to Tatev usually offers amazing views of a steep waterfall, a ruined monastery and some of the most beautiful changing colors and layered mountain views anywhere in the world. Not this time . We took heart that a lot of work was happening on the road. Stone walls are being erected to safeguard against subsidence. There are signs that miles of asphalt may be on the way. As we wove and bumped and slid and revved our way down and up on the  hairpin bends, we waved and nodded to road laborers working in the cold. After an hour’s drive on the churned dirt road  it was a pleasure to meet with the delightful young women of Tatev who know the contest and want the chance to win the glory and opportunities that Ani and Lilit earned for themselves last year. More offers of tea and coffee–we promised we’d go back in February to take them up on this.  It will probably take this long for the Khot belite to work its way through my tortured intestine. 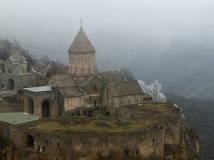 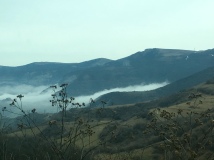 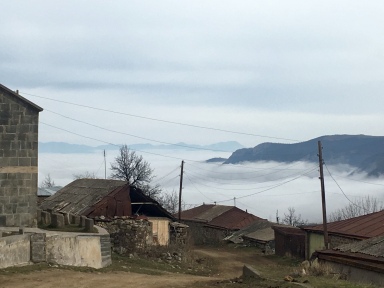 After Tatev, a village I had never been to before. Martin, a 16-year old who lives there, has won national prizes in our  recitation contest in past years. We were lucky to reach Svarants. A bulldozer working as part of the road project had whipped the road into a quagmire. Would we have to turn back? Slowly, slippery, we made it, tires coated in several inches of mud.

Svarants school was built to accommodate 400 students in the Soviet era. Then, there was an iron mine that provided work for the men in the village. Today,  most of the houses in this beautifully situated village (1700 meters above sea level) are empty. Now, 15 students study at the barracks of a school. They are used to making the best of things in Svarants. All the way up the stairs to the one occupied corner of the building, house plants are growing in water bottles repurposed as hanging baskets.  There are 4 students in Martin’s class. A teacher comes from Goris once a week to work with  them on English for two hours. The English room displays only the Russian alphabet. The desktops are gouged with the names of generations of previous students. Everyone wears coats and scarves. Martin has made it to the final round for the FLEX program. In spring, he will learn if he has been selected to study at high school in America for a year. His achievements are remarkable.

The younger forms at the school had grouped together to put on a holiday show. I found myself the guest of honor and was glad I had a sheet of celebratory stickers in my bag–one for the coat of each child. 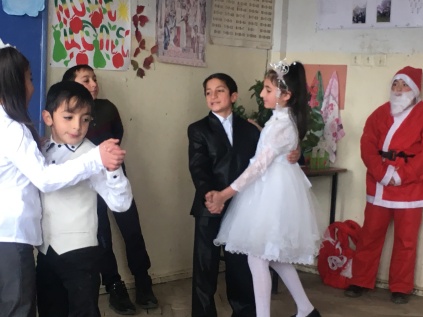 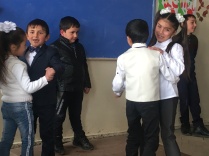 Martin gave me a plastic bag full of home-grown kidney beans as we left the school. The beans grown in Svarants are better even than those from Goris.

On the slow grind back through the canyon, the workers we had seen on the road called and waved to us. They had parked their giant trucks and were now squatting on the frosty hardcore, enjoying a late lunch.

“I’ll get you something” said Ara, and began to pick his way across the rubble. I left the warmth of the car to take photos

“Come, sit, eat” called the men again “we have cutlet, fried potatoes, cheese and beans. Will you have some vodka?”.

Usually I steer clear of homemade vodka because it is 80% proof and burns like bleach. But when was I ever going to be invited to a party like this again? I was handed an adorable cocktail glass made from the upended neck of a water bottle. I held the cap end, and drank from the rim cut with a penknife.   I drank the vodka to cheers and claps. Ara declined because he was driving. This did not seem to have deterred the men with the keys to the giant trucks… 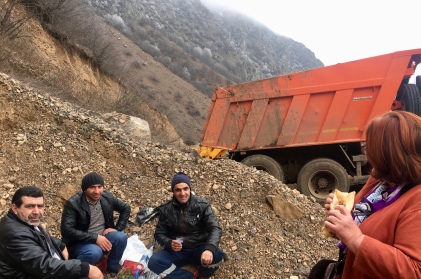 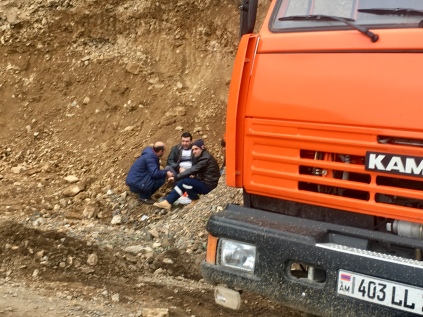 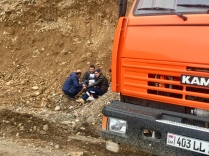 My lavash burrito of potato, red onion, white cheese and local beans with garlic was truly great picnic food. On the way home I marveled merrily at the natural decorations provided by frosted wild flowers. The trip wouldn’t be possible today. We had a heavy snowfall last night, and the road to the villages is closed. 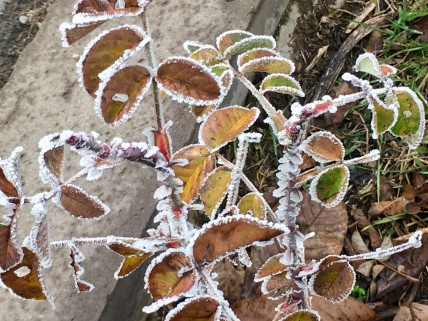 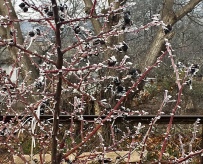 5 Responses to In the bleak mid-winter