Stories out of school

I was to teach a class about networking– how to make the kind of friends that help you get by. Ironic really that this session was scheduled for the evening Serzh Sargysan lost his job: the very day that thousands in Armenia chose to challenge the idea that it is not who you know,but how you behave that matters.

“Do you really think anyone will come?” I asked Samvel Movsisyan in a tone both incredulous and forlorn. The streets were solid with flag-draped cars and people whooping and cheering. I had no way of knowing if the 12 members of the Leadership School’s executive class would be celebrating or nervously lamenting change at the top, but either way it seemed unlikely they’d want an evening that smacked of serious study.

They’ll come” said Samvel in a voice that was doing its best to sound robust.

Five of them did come, four men and a woman. We worked in English, because it is the only language I speak.

Marina is an architect who now runs Source Foundation, an NGO that advocates for,and provides services to, children with all kinds of mental, physical and behavioral difficulties. She has been up and running for 4 years and has an impressive list of international partners.

Ruben runs Regard, a travel company catering to the needs of Iranian tourists. Apparently they eat a lot, the Iranians. “One of my visitors said it is because in their country there is nothing else to do” said Ruben “No dancing. No cinema. No alcohol. So they sit and eat. When they come here they always say we don’t serve enough particularly at lunchtime.” Ruben is building his own hotel with a custom kitchen that can supersize everything.

The company Armen founded is named for an ant colony–an indication of their reputation for hard work, heavy loads and ingenious solutions.  Esterox develops apps and websites for companies all over the world–prices for these services in Armenia are a bargain compared to those offered in London, Paris, New York, Munich, and of course tech specialists here speak perfect English.

Vresh uses his experience gained in years of work in 4 and 5 star hotels to run Feel Inn, a welcoming hostel near Republic Square. I inquired about a room.

“We are full up with journalists right now” he said, smiling. I could imagine edit equipment on every available surface as reporters tried to turn round their stories about Serzh in time for the evening news.

Tigran is building houses outside Yerevan and planting walnut trees further north. It will be 8 years before he has a harvest. This is a man invested in the future of his country. He consults and audits a bit too. You know, in his spare time…

Our conversation ranged from networking on the phone (make a conscious effort to smile. It makes your voice warmer), how to ask for informational interviews ( remember people like to talk about businesses they are proud of– ask them to share best practices) and the importance of a clear subject line and call to action in a (short) email.

They taught me how to deal with the dreaded networking reception: eat before you go. Of course, that’s where I’ve been going wrong.

We talked about ways to offer value and keep a connection going and as the class closed everyone made an action plan.

Following the session I received one Linked in request, two FB connections (Facebook is a valuable business tool here) and two emails, one with a clear invitation (immediately accepted) and one with an offer I intend to take up. Both emails had beautifully clear and compelling subject lines.

It is not at all clear what value I may hold for the group, but they certainly delivered value to me. I have a new place to stay, I know where to go for a big lunch, and I have a plan hatching for an app or two. I have already connected Marina to some of my fellow volunteers with a particular interest in inclusive education–they are glad to be in touch. I’m only sorry I won’t be around to crack Tigran’s first walnut in 2025. I am glad to know them all.

Note: this post was written one week ago. A lot has changed in Armenia since then and is changing still. As a visitor here I will not be commenting on politics, but for the sake of these lifelong learners and small businesses– plus of course the children featured below– I wish Armenia a safe, prosperous future full of opportunity for all 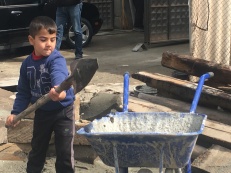